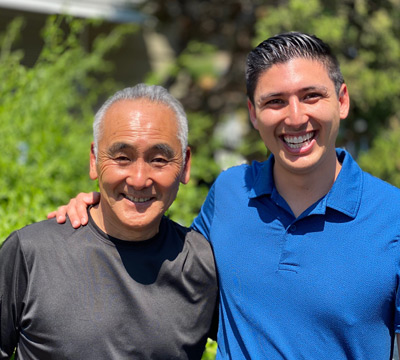 With his books in wide use, his former students appointed in high places across the Bay Area academic landscape and his son recently promoted to full-time faculty, the teachings of Randy Fujishin can still be found everywhere on campus.

Heading west along the Campus Center Walk, there’s a bridge that connects West Valley’s PE and Language Arts/Social Sciences buildings to the college’s campus center. As you cross, look right for an understated bronze plaque, its wisdom inviting quiet contemplation among the foliage that lines Vasona Creek.

“The most significant skill you will learn in life is the ability to communicate… to build bridges that allow you to connect to the minds, hearts, and lives of others.” Those words are attributed to Randy Fujishin, a former professor and department chair of Communication Studies whose impact on West Valley is the stuff of legend. For nearly 40 years, Randy’s efforts stand out for his continued ability to create connection and foster positivity not only among his students, but throughout the college.

Randy never accepted offers to teach elsewhere, nor did he jump at opportunities to advance in higher roles with the college, steadfastly believing that teaching was the best way he could impact the lives of others. Still, his longstanding commitment to West Valley has vastly influenced communication studies in the Bay Area. He notes that between 70 and 80 former students of his have gone on to pursue careers as communications professors, including those who have rose to become department chairs at Mission College, De Anza College, Cabrillo College, and West Valley.

In fact, two of West Valley’s full-time faculty members in Communication Studies are “Randy-ites,” a term John Hannigan, the department’s chair, uses to describe students who found their calling in Randy’s classes.

“It changed the whole course of my life,” shares Hannigan when spelling out Randy’s impact. He recalls that Randy’s class was the first time school felt easy. After a career in high tech, Hannigan began teaching public speaking. When a job opened at West Valley, he eagerly applied, and as they grew to know each other as colleagues, Hannigan says Randy’s continued mentorship – which he maintained even before Hannigan returned to the college – was critical to him becoming an effective department leader.

What was it that made Randy Fujishin such a revered educator? His hybrid teaching style, which drew upon his schooling in communications and counseling psychology, certainly gave him a wealth of knowledge to draw from. There was also an unwavering compassion for his students that almost seemed to radiate.

“He wasn’t just a good teacher. He was so passionate about communication, and lived it himself, that I started seeing connections between improved communication and improved living, and that my life and relationships could get better,” Hannigan explains.

“I think if one thing marked my teaching, it was enthusiasm,” shares Randy during a sunny morning on campus. “I would do cartwheels in class. I would do scenes from Shakespeare. I would do Old Testament dialogue… But the purpose was always to awaken their spirit.”

Part of what made his teaching so effective were the stakes with which he presented his material. At the beginning of each new communication class, he’d have students stick their tongues out and look at one another. With the silliness out of the way, he drilled down to his core idea: your journey is not public speaking, nor is it West Valley College or to be rich or successful. Your journey, he would explain, is what you choose to do with your mouth in this lifetime. “My whole thing was that life and death is in the power of the tongue,” notes Randy.

Yet as he admits, teaching was the furthest thing from his mind when he graduated from UC Santa Barbara with a degree in Speech Communication. So was the mainland.

Upon graduation, Randy headed to Hawai’i to hopefully gain notoriety as a TV news anchor at a new ABC affiliate in Honolulu. His dream at the time was to become rich and famous. But after only a few weeks in the real setting, he abandoned broadcast journalism. Spending his days surfing and his nights sleeping on a sloop in Ala Wai Boat Harbor, Randy contemplated his future. Then a letter arrived that would change his life.

The message was from Winston Miller, a former teacher from Campbell High School. Now a speech instructor and Chairman of West Valley’s Speech department, he urged Randy to move back to California and teach public speaking at West Valley. At first he balked, but Miller’s persistence made him finally head back to the Bay Area. Weeks later, Randy was set to teach his first course.

“Within five minutes, I knew,” he recalls of that transformational first evening in front of students. “It was like going back to the strawberry fields and orchards of my childhood, the rice balls and teriyaki hot dogs – oh gosh, I’m home.”

His writing career carries a similar sense of serendipity. His first book, The Natural Speaker, was initially written in 12 days as a cost-efficient resource for students. A call from Prentice Hall kickstarted his publishing career after a book rep found a copy of his photocopied, spiral-bound manuscript in the student bookstore. That text became the first of nine titles now bearing his name, including Natural Bridges, Gifts From the Heart, and Creating Effective Groups.

“He was just so captivating,” recalls professor Michelle Zajac of her time in Randy’s classes. As a homeschooled student her whole life, college was a terrifying prospect. She had no plans for higher education, and only took classes because her father pleaded with her to try one semester at West Valley. Thinking her 4.0 first semester was a fluke, she returned in the spring and took a 7:45am public speaking class with Randy.

She was struck by a bold prediction he made after her second class. He asked Zajac what she wanted to be. She was studying to become a therapist, but Randy shot the idea down and instead offered an alternative: she should become a teacher. Little did he know, but by the end of the semester, Zajac had changed her major to Communication Studies, then transferred to San Jose State to earn her Bachelor’s and Master’s. That journey eventually led her back to West Valley, where she’s now a full-time professor.

“There are so many people who love him because he made everyone feel as though they were the most important person in the world in that moment,” she shares. “He made me believe in myself. As a student who didn’t think I could complete college or be successful, he really shaped my life.”

Randy’s teachings show up in more than just Zajac’s syllabus. A sign-up sheet on her office door encourages students to drop in during her office hours simply so she can get to know them better. She also shares the story of how Randy changed her life on the first day of every new class. As a living example of how one teacher can change everything, she hopes her story helps disarm her students’ own fear of failure.

Zajac is also part of another statistic Randy’s infamous for. There used to be a joke that said more students get married in his classes in one year than all other courses at West Valley combined. As luck would have it, Zajac met her husband, Brady, in one of Randy’s classes.

Last Fall, the Fujishin legacy at West Valley grew one step deeper when Randy’s younger son, Jared, accepted a role as an adjunct professor in the Communication Studies department. As Jared notes, it’s the latest season in his interaction with a school he’s known practically his whole life.

“For Halloween, I used to dress up as a professor when I was a little kid,” he warmly recalls, though at the time, he didn’t quite know how special his father’s impact truly was. “I don’t think I realized until I was older that it was unusual to be stopped in the mall and have people say that your class changed their life.” Years later, he and his brother got to witness the magic for themselves when they each had a chance to take one of his father’s classes.

Though there was no obvious light bulb moment connecting him with his field of study, Jared says he grew up a natural communicator. He followed that passion to a degree in Intercultural Studies at William Jessup University, then received his MA in Communication Studies from Liberty University. Still continuing his studies, he’s halfway through his Ph.D program in Communication Studies.

“One thing I see that has clearly been trained is that he cares about his students first. He just loves on them, and they respond to him. Students just feel safe, and he builds a beautiful community in the classroom,” adds Hannigan of Jared’s quick impact on West Valley’s student community.

Spring 2020 offered Jared a distinct chance to shine. Given his experience with distance learning, Jared was uniquely prepared to quickly adapt to an online-only learning environment in the wake of COVID-19. His skillset even gave him the chance to lead a department training on best practices for recording lectures. Perhaps because of his skillset and his quick impact on the student body, he was added to the department’s full-time faculty in early July.

Jared joyfully shares that the promotion is a dream come true, brimming with excitement when relaying just how proud his parents were to hear that the next step in his teaching journey would continue on the same grounds where his father had such a distinct impact.

“I’m very grateful that [department chair] John Hannigan believed in me and saw something, and that I get to learn from him and the rest of the team. I’ll try not to let them down!”

Despite the distance present in a COVID-19 affected learning environment, Jared has tried his best to maintain a personal touch. Recently, that’s showed up through personalized response videos he records for every student who submits a major assignment, maintaining a human element even if the answer is offered virtually. Much like his father, Jared’s immediate impact has come through an incessant dedication to individual attention. Sometimes it’s the little things that make the biggest difference.

That point connects to an answer Randy provided in conversation about what moments still resonate with him from his decades teaching. He said nothing of awards or accolades. What sticks out is an extra credit assignment.

If students wanted to improve their grade, Randy offered an abstract solution: take one of your parents on an overnight trip at least 50 miles away, paying for meals and accommodation. On the ride over, you cannot listen to the radio; instead, ask your parent ten questions to get to know them better. To earn credit, students had to provide a photo of the two together at dinner, and write a one-page paper on how their parents answered the questions. Parents only needed to write a paragraph on what their experience was like.

“The greatest award I ever got was when I would have the parents say my daughter or son has never done this,” Randy explains. “It could be [them saying] ‘They’ve never asked me questions and listened,’ or ‘My kid took me out to dinner and said I need to honor you.’

“They’d say ‘Where the hell did that come from?’” he retells with a mischievous smile, pausing for dramatic effect. “’Oh, it’s just my speech class.’”