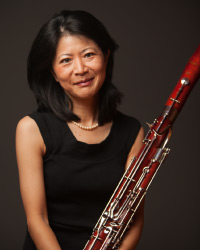 Dr. Yueh Chou has been teaching for over two decades in the Bay Area. She has successfully cultivated numerous students into universities such as CSULB, UCLA, UC Berkeley, UCSD, Wellesley College, University of Puget Sound, Brown University, Duke University, and Stanford University.

Dr. Chou holds Doctorate (2000) and Masters (1996) degrees in music performance from the University of Southern California. She has a Bachelors degree in music performance from the Juilliard School of Music (1994) and a Certificate Diploma (2007) in Early Music Performance on both Baroque and Classical Bassoon from Koninklijk Conservatorium Den Haag in The Netherlands. Dr. Chou has been on faculty at San Jose State University since 2011 and the Pre-College Division of the San Francisco Conservatory of Music since 2001.