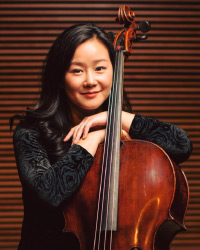 Cellist Nancy Kim is a faculty member at the Community School of Music and the Arts, and maintains a private studio in Sunnyvale. Her students have gone on to win top prizes in competitions such as Korea Times Competition, US Open, and USIMC (United States International Music Competition). Multiple students have won Music Teachers’ Scholarships through Palo Alto Unified School District, and have participated in Hopebox and KAMSA. Nancy has been invited to coach cellists in youth orchestras throughout the Bay Area, from Belmont and Palo Alto, to the Monterey Peninsula. Her students are leading members of Palo Alto Chamber Orchestra, Golden State Youth Orchestra, Peninsula Youth Orchestra, and California Youth Symphony. Nancy is a former cello faculty member at the Waldorf School of Los Altos, Cazadero Performing Arts Camp, and New York University’s Summer Trio Program.

Nancy earned her Master’s Degree in the Orchestral Program of the Manhattan School of Music, and both her Bachelor’s degrees in Cello Performance and English from Oberlin College. Her teachers include Alan Stepansky, Peter Rejto, Csaba Onczay, Irene Sharp, and Sieun Lin. She has played in masterclasses for Janos Starker, Jaap ter Linden, Hans Jensen, Richard Aaron, and Emilio Colon. She studied cello pedagogy with Marion Feldman in New York, and advanced teaching techniques with Dr. Carol Aicher. Her chamber music coaches include Sylvia Rosenberg, as well as members of the Emerson, Borromeo, Vermeer, Muir, American, and St. Petersburg quartets.

Nancy performs regularly throughout the Bay Area. She is currently a tenured member of the Monterey Symphony and Santa Cruz County Symphony, and she has performed with Mendocino Music Festival and Opera San Jose. Nancy has been invited to tour the Sultanate of Oman with Lorin Maazel’s Castleton Festival Orchestra in performances of La Boheme at the Royal Opera House of Muscat. She is a former member of the Chicago Civic Orchestra – and she has received coachings from John Sharp and Kenneth Olsen. While in Chicago, she was an active participant in the Kindermusik program of the Chicago Symphony, and a MUSICORPS outreach musician through the Chicago Civic Orchestra. Her outreach work took her to many MAP schools to demonstrate music and musicianship with fellow members of the Civic Orchestra. She was also an active sectional coach for the Chicago Youth Concert Orchestra (CYCO), Debut Orchestra (CYDO), and the Whitney Young High School.

A dedicated chamber musician, Nancy has played with distinguished performers such as violinist Glenn Dicterow, violist Karen Dreyfus, conductor Alan Gilbert, and the composer Richard Danielpour. She is a former member of the flute-cello-guitar trio Black Cedar – a winner of grants from the Zellerbach Family Foundation and San Francisco Friends of Chamber Music, and an affiliate ensemble with San Francisco Friends of Chamber Music. They were featured on KALW 91.7 FM and KKUP 91.5 FM, and their debut album, “A Path Less Trod” has received critical praise – making the list of recordings in 2016 by SF Classical Voice.