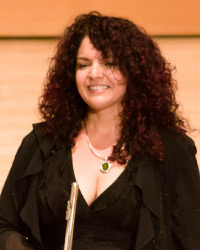 A quintessential communicator and educator, Teresa has mentored several hundred young musicians in her many teaching positions during the last two decades including the San Jose Youth Symphony, migrant-student educator in Salinas, Valley Christian Elementary Junior Conservatory, coach and clinician for several youth orchestras in the San Francisco Bay Area and "in schools" demonstration coordinator for the Monterey Symphony Orchestra Woodwind section. She has moved so many with her passion, love and enthusiasm for music and is inspiring a whole new generation of students to be excellent in both musical skill and temperament.